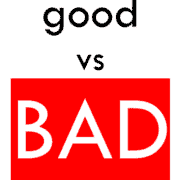 Negativity is an attention magnet.

These days, you could be forgiven for thinking that the world is falling apart. The worst of humanity seems to fill our newsfeeds on a daily basis, to the point where all that bad news appears to be seriously affecting people’s mental health. 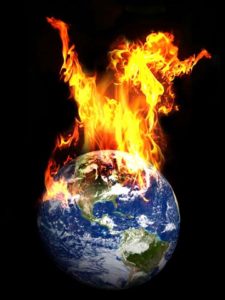 Actual photograph of the world today?

But in reality, the world is safer than ever before, crime in the U.S. is approaching historic lows, and the U.S.’s renewable energy production recently surpassed coal-based output for the first time. Elon Musk, Bill Gates and Warren Buffet all think that now is the best time to be alive.

So why is it so hard for positive messages to cut through the clutter?

The answer is negativity bias, and it makes marketing a positive product or positive message more difficult than ever. Fortunately for those of us trying to fight the “good” fight, the recipe for successfully marketing good causes does exist.

Let’s start by examining the main challenge a marketer faces when trying to promote a positive message.

What is Negativity Bias?

Numerous studies have confirmed that people gravitate more toward negative content, which is likely caused by our brains being wired to respond more sharply to perceived threats. The majority of media and websites, driven by the goal of raising advertising revenue, have leaned into this negativity bias in order to grow viewership, which leaves little room for organizations looking to promote a positive message.

The reality is that people crave good news and positive stories. Promoting them simply takes a lot more work and a defined strategy in order to cut through the negativity. Let’s look at five ways to market good causes below.

1. Speak Directly to the Tangible Benefit Your Audience Will Receive

The most important realization for any organization trying to recruit consumers for a positive cause is that the altruists in any market represent a small percentage of the total universe. Let’s look at green purchasing as an example:

What this data means is that at the end of the day, no matter how noble your cause, people will still make their purchase decisions based on perceived individual benefits (value, convenience, price, etc.).

Your marketing should lean into this realization, and focus on the tangible benefits your audience will experience as individuals if they choose your offering. Data can help immensely here, as we’ll see below.

2. Put Data on Your Side

For the purposes of marketing “good”, there are two types of data:

As we’ve already learned, the first dataset will get people’s attention, but the second will drive them to action.

Let’s read that statement as an individual human. What can one person possibly do about such a huge issue? For most of us, very little, which is why it’s important to focus more heavily on individual benefits. 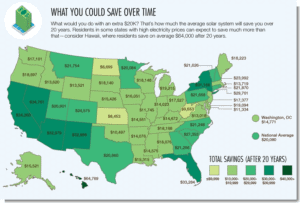 This second data point, drawn from this CleanTechnica data, links the action you want your audience to take, switching from fossil fuels, to the individual benefit that will help push them to make a decision.

Communicating with this kind of individual benefit data will help you grow traction in any marketplace.

Customers will always follow the path of least resistance. So remove the resistance.

Customer purchase decisions generally follow the path of least resistance. While there are always exceptions, most people will choose the cheapest, easiest solution for most products. So what does this mean when you’re marketing a good cause?

Unfortunately, if your solution asks your audience to go out of their way, invest a lot of time for an uncertain return, or pay more, it will often fall on deaf ears. And the key to solving this challenge is to do the legwork in order to make adoption as easy as possible for your audience. 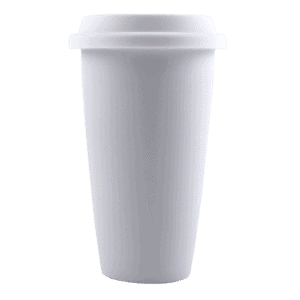 Here, I’ll use an example from a printing company trying to sell an improved paper cup to a major food and beverage retailer that would have made the recycling of that retailer’s cups much easier. The cost of using this new cup would have increased the price of each cup by a fraction of a cent. This doesn’t sound like much, but for a publicly owned company purchasing millions of cups a day, the profit impact plus the effort of switching vendors proved to be too much.

How do we do it? Make the path you want your audience to take dead simple.

If you’re collecting donations, why not go to people’s houses instead of requiring them to come to you? If you’re trying to promote green energy, it might be time to hire a lobbyist to get preferential legislation passed that tilts the scales in your favor. If you’re marketing a more expensive green product, consider what you can do to come close to price parity with less eco-friendly competitors.

These efforts are difficult, but they matter when you’re dealing with decisions based on fractions of a cent.

As we touched on earlier, nothing motivates a business or market more than bad news. Poor press, public backlash, or shifting market preferences can all push an organization to take action. 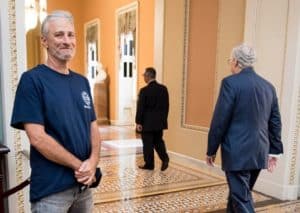 Jon Stewart in the Senate hallway before the final vote on the 9/11 First Responders’ Compensation Fund.

Let’s take Jon Stewart as an example. His recent push to get the federal government to re-authorize the September 11th Victim Compensation Fund saw him going to great lengths to call out senators who were viewed as obstructing the bill’s passage, ultimately leading to the bill’s reauthorization for the foreseeable future.

How can you ramp up the pressure on your audience? There are many tactics to do so, from letter-writing to Greenpeace’s more controversial direct action efforts. These days, a coordinated social media campaign can often be effective. The key is to use this approach over time, and provide a pathway for those involved to take action in the meantime (per our third point above).

5. Dominate the News Cycle – with Positivity

Finally, it’s important to remember that more and more individuals are providing news and other content via social media. And deep down, people crave positive content.

A study from the New York Times and the Marketing Science Institute found that while content that evoked anger or anxiety was more frequently shared, positive content was actually more viral overall.

Over the long term, positive content is more viral.

As well, social media scientist Dan Zarrella has shown that the more negative your account, the more you’ll see your followers leave. 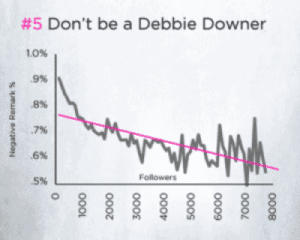 So what’s our lesson here? If you post positive messages and content about all the good results your cause is generating (as opposed to the challenges it faces), you’ll be doing a great job of counteracting the negativity generated out in the media.

And you want to tout those wins as often as you can – one study found that a ratio of 5 positive interactions were required to counteract one negative attitude or behavior. So turn up the volume and let your positive vibes fly!

I hope that you’ve found our five tips to market good causes in a negative world valuable. If you’d like to talk more about how to get your positive message out to your audience, please get in touch!